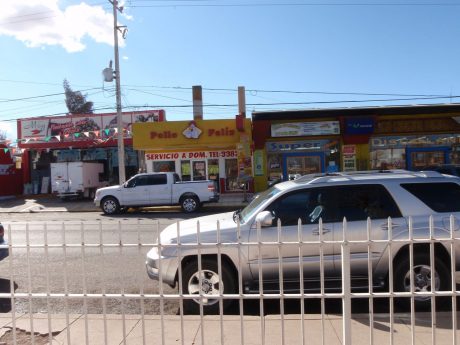 Having crossed into Algodones last year, we decided to give another border town a try during our visit to Bisbee so we crossed into Agua Prieta from Douglas, Arizona. The other option was from Naco, Arizona to Naco, Mexico.

We drove from Bisbee to Douglas first thing in the morning around 8am (who knew I’d be awake at that time, ever?!) which took about a half hour on the normal two-lane roads that are scattered through southern Arizona.

When we got to Douglas, we followed the signs for the border crossing to Agua Prieta, and hoped to find a parking lot similar to the one in Los Algodones. No such luck. First off, there is some construction and traffic re-routing going on, so it was very confusing to find the way to the border crossing. Turns out the road winds around behind the Walmart, on a dirt path that doesn’t really have any signage which I found only by following the string of cars that appeared to be Mexico bound. As we round the corner behind the Walmart it becomes obvious that there is no parking lot for this crossing like there was in Algodones, but at this point we’re between cones and being observed by border patrol in their SUV’s so turning off the path, weaving through cones to cross the dirt strip and hop the curb into the Walmart parking lot might get some unwanted attention for us, so I decide we’ll just stay on the path and find a turnaround at the border crossing. Luckily we were early and there was nearly zero wait.

When you’re driving in to Mexico here, there is a US Border Patrol station that you have to drive through first and they start asking a lot of questions, look under your car with mirrors and generally try to figure out if you’re a fugitive, gun runner or drug smuggler. I decided to go for the pre-emptive stupidity show, by rolling down the window and asking where the walk-in parking lot was, even though I now figured out there wasn’t one. They of course told me there wasn’t one, and asked me why I would want that. I told them we were looking to just walk in and see what the town was like instead of having to hassle with the vehicle, insurance, etc. which seemed to satisfy them that we were just dumb tourists (which we are) that took a wrong turn (which we did). The out of state plates and the bikes on the bicycle rack on top probably helped some too.

They opened up one of the cone-walls and let me turn around at the US-outbound checkpoint, with more than a little snicker on their face. After our almost-to-Mexico u-turn, we parked at the Walmart parking lot, walked in the store to buy a couple items, dropped them off at the truck and walked to the border crossing.

Walking in here is not quite as relaxed as it was in Algodones. I hope by revealing this, I don’t inadvertently draw attention to it too much and find out that Algodones is soon overrun by undesirables looking to get across without much scrutiny. Anyway, back in Douglas, as you walk down the sidewalk from Walmart (or any number of other stores or street parking spots one might be able to use) you walk right by the drive-in inspection station, and 2 of the ICE guys stopped us to question what we were doing. I didn’t see them do that to anyone else, so I think they just wanted to make sure that the only 2 white people crossing this morning were actually doing so on purpose. They were friendly enough, and actually much more so that anyone I have ever dealt with at DMV or customs before, and we were soon on our way.

Once you get across the border, it is really obvious that this isn’t one of those border hang-out towns and probably never was. Combined with the fact that Douglas is not worth a stop, let alone a stay at, and that most people who travel in to Mexico now seem to want to get away from the border as soon as possible, it seems Agua Prieta is a perfect sister city to Douglas. Sure, there were a few pharmacias and a scattered convenience store here and there, but the street peddlers selling cheap imitation watches, sunglasses and other items were nowhere to be found, replaced by shady looking characters roaming the streets, or armed security guards standing by bank doors.

We stopped in a few of the pharmacias looking to score cheap meds for my asthma but the one drug I needed wasn’t something they had, or even had the ability to get reasonably quickly so we walked about 5 blocks on the main street heading south, between dilapidated buildings with bars on their windows until we got near the town square which seemed much safer than the rest of the area. There were a few groups of people standing around or sitting on benches waiting for what seemed like yet another day to pass, and a couple stores across the street. 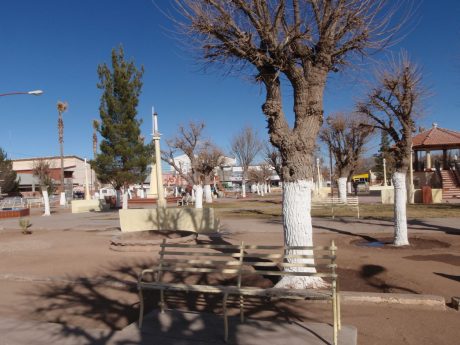 We didn’t spend much time there because it wasn’t warm out, we were unsuccessful in the medicine hunt, and the place didn’t feel very inviting at all. So we walked back to the border crossing and breezed right through. We also didn’t take more than just a couple pictures because not only was there nothing significant to take pictures of, I didn’t want to stand out.

Now back on the US side there is a “duty free” shop, although it wasn’t terribly obvious that it’s for export-only. We of course went in and bought some stuff and then found out we had to pick them up on the Mexico side. Wups. We’ll, we just had to cancel the purchase because we weren’t about to do the loop again, and I think if you go to Mexico with duty free items and then bring them right back in (in the same bag none the less) they’ll probably charge you duty on your way back. It wasn’t worth finding out.

After our failed duty-free attempt we walked back to Walmart where we got in the truck, had a perscription filled, which took for-evar! All in all it had to be somewhere about 4-5 hours, thanks to my overprotective doctor back home who made a problem out of a prescription he’d already written me! During this time we ate some of the worst food we’d eaten in our lives and the lady got her hair colored while I walked around aimlessly at Walmart, waiting and making the occasional phone call to try and get the prescription-fill-speed up to somewhere less than a half day.

Finally, it was filled, and only cost me about $300 for a month’s supply which is a total joke. It’s no wonder people cross to Mexico and order from Canada for medicine which at worst is 60% of the price and at best around 5%.

My recommendation is skip Douglas and Agua Prieta unless you are planning on just driving through, and while Walmart does allow you to overnight in most of their parking lots, I would really hesitate to do so at this one due to it’s close proximity to the border and the woods that separate the fence from the Walmart lot unless you want to either be roused by a border patrol agent asking you to move, or have some other unexpected visitors looking for a way to stow away after their mad dash across the border.

4 thoughts on “A Quick Border Crossing into Agua Prieta, Mexico”