Say you’re curious about comparing what fuel costs in another country. For example, I wanted to see how much it cost for diesel in Montreal, Canada. So I found a web site that appeared to be the French-Canadian red-headed-stepchild version of GasBuddy which I use on my phone all the time to find cheap fills where I’m at. It’s super handy BTW so check it out if you want to find the cheapest fuel.

Well, the problem was that the prices listed on said French-Canadian site didn’t make any sense to me. It was even in French too. But after some Google Translate love, I figured out that the prices were in Canadian cents.

Thanks to Google, I converted CAD to USD and then remembered that their price is per liter so I’d have to do yet more converting. Ugh. This was getting tedious for satisfying an idle curiosity.

Then I remembered Wolfram Alpha. If you haven’t seen this before, it’s seriously worth checking out and especially watching the introduction video.

Being the high school math graduate that I am, I quickly remembered how to make an algebra equation to convert the Canadian fuel price to USD and at the same time divide gallons by liters and multiply the result. I can remember how to do this, but simple addition or multiplication gets me almost every time. Go figure. 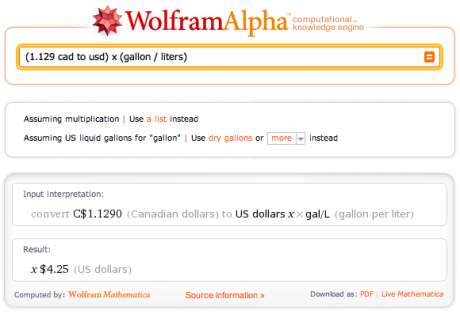 Another nice thing about Wolfram Alpha is that you can forget symbols and stuff and just type it in, in case you forget or don’t know how to put certain symbols in with your computer for more complex equations. Here’s the same formula typed out in plain words: convert 1.129 canadian dollar to us dollar then multiply by number of liters in a gallon

Fantastic! While that’s not even scratching the surface of all the impressive things it can do, I can use it to convert things like MPG to 100km/L, fuel prices and other multiple step things that I would normally need to set up a spreadsheet for or do the math one step at a time myself.