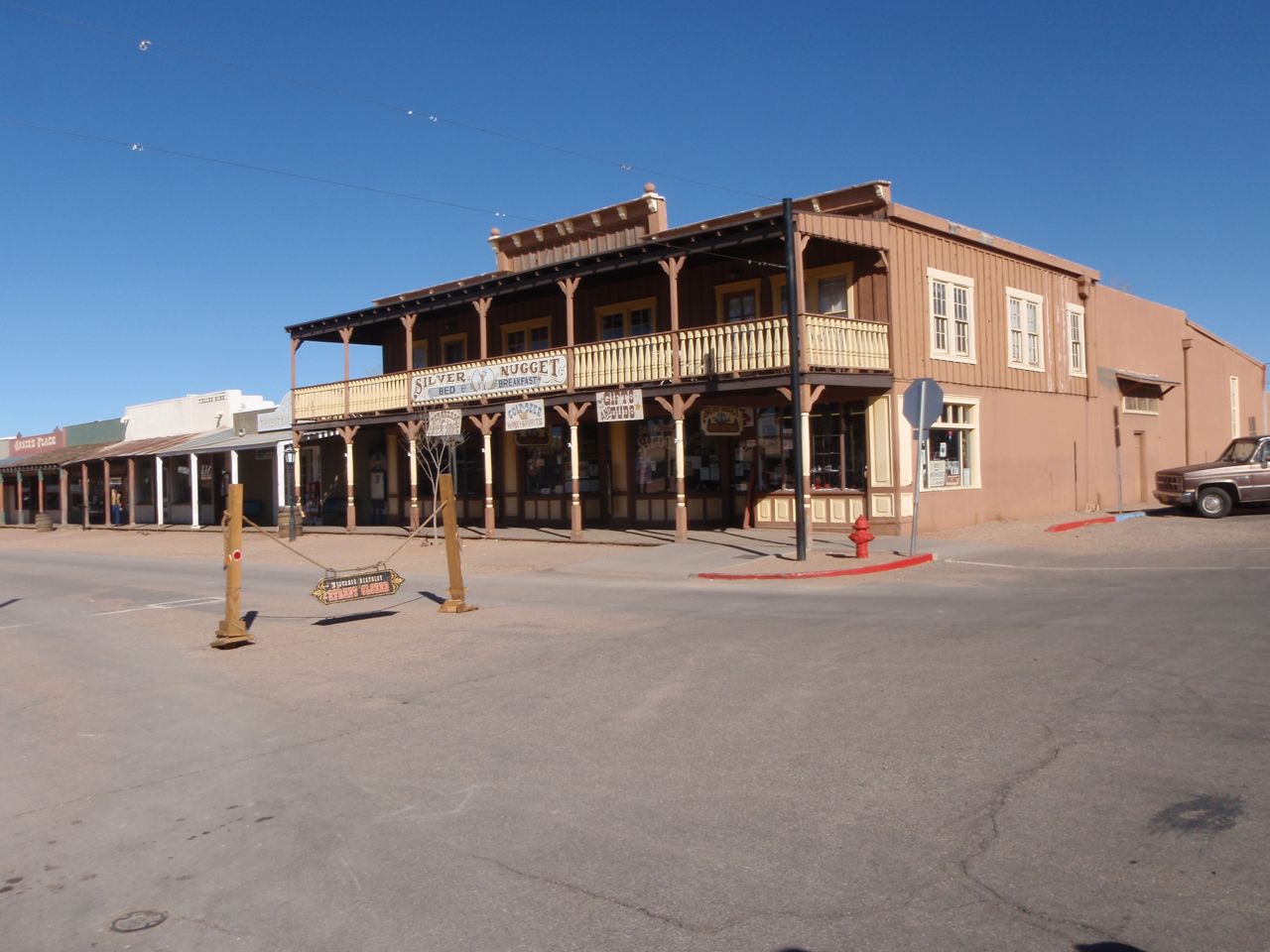 Right after we got our Airstream back from the dealer in Tucson, we headed out to visit Tombstone. Our first couple nights were spent at the Tombstone RV Park which is a mile or two before you get to town on Hwy 80 from the north, and then ended up moving to Stampede RV Park which is right at the end of Allen street about 3 blocks from all the action in town.

Allen street is not the main street through Tombstone, but it’s the main street for anything to do and has been preserved and/or reconstructed to look like Tombstone was in the old days. There’s wooden sidewalks and the street is closed to traffic although the horse-drawn wagons and stagecoaches are allowed, as are anyone on horseback.

For you with short attention spans, here’s the requisite photos. Just don’t forget to read our experience which continues below.

Tombstone has been one of our favorite places to visit. I was a bit worried that we’d get bored of the touristy small town feel being there for 6 days but that wasn’t the case at all. Once we moved to the spot in town, we were able to walk to everything and left the truck hitched to the trailer the entire time.

Everyone we met in Tombstone was very friendly. There weren’t too many young locals, mostly older folks who either had been brought up around the area and stuck around, or moved out to only move back later in life. Everyone said hello when you walked by, and even the people driving by as we walked the neighborhoods would waive a hello. A far cry from the history of being a rowdy town with gunslingers for sure.

One of the folks at the Stampede RV park pulled in next to us in his pickup truck with no camper, trailer or motorhome. At first I thought he might sleep in the back in the canopy, but soon he was out there setting up his tent. I stopped by a little later on to say hello to our new neighbor for the night and asked if he wanted to borrow one of our electric heaters for the night since it was consistently around 25 degrees during the night. It’s amazing how the desert can swing 60 to 70 degrees between night and day. He politely declined and proceeded to explain to me his setup that would keep him warm, but I think he was doing it mostly to make me feel like by not forcing the heater on him that he’d freeze in the night. I don’t know how many times he’d done that before, but he was set up quite well to weather the night in the cold. Turns out his name was Bill, and he’s a writer that specializes in the Southwest and lives in Tucson. Bill had just started a fire in a pit that he’d borrowed from the park and invited me to hang out next to the fire with him. We sat for somewhere around 2 or 3 hours chit chatting by the fire pit which we agreed looked like it was made out of an old washing machine drum talking about different life experiences; Bill had lived and worked in Mexico for a while, traveled to Cuba officially via the channels available to reporters and overall had lots of interesting stuff to share.

Our routine in Tombstone saw us going for a few walks per day since it only took about 8 minutes to walk the length of Allen street starting from our spot at Stampede. I resealed the rest of the windows on the Airstream in preparation for the rain forecasted for this week and we started getting caught up with our online life now that we were back in internet range again. We acted like tourists and watched the street show of the Earps’ getting ready to chase the Cowboys gang out of town, which ended up with a gunfight at the OK Corral, where you had to pay to see the show. We skipped that part, but I have to say they did quite a good job from what we saw, and baited a lot of people to go to the show. We took a stagecoach ride pulled by mules. We pet horses we met in town.

We listened to live music a couple nights. The first night was a jam session where anybody (or maybe anybody who they knew) could bring their instruments and about 8 of them sat in a circle and played tunes, taking turns picking the song to play. The second night had one of the folks from the jam session, Doc, playing his saxophone accompanied by a 95 year old man named Gene on the keyboard. It was awesome to watch them since one would just start playing a song and then the other would join in once he recognized what song it was. They never said anything about what song it was before they played it, and usually explained some history about the song after they were done. Doc, the sax player went to school at U of O and we struck up a conversation when he saw me wearing my Oregon shirt.

On our last day there, the entire town’s power grid went down in the afternoon. I don’t know for sure, but speculated that someone probably hit a power pole on the highway, and the locals said that’s usually the case when the whole town loses power. Sounds like it happens more than occasionally. Everyone was still having a great time and instead of ringing things up on their computerized systems they were writing hand receipts and dealing in cash. No one was even complaining, and some places that were darker inside started lighting up candles. It was kind of fun for since it made it feel even more authentically old, and the power was only out for about 3 hours total.

I have to say Tombstone was nothing like I expected. I figured it would be a complete tourist trap (it still was in some ways) where the locals were there only to get your money but it doesn’t feel like that at all. The locals and tourists mingle more than any place else I have seen in my life. There didn’t seem to be local hangouts where the tourists didn’t go or where I didn’t feel welcome or even mildly out of place. Lots of the people worked in some tourism related service whether it was food, hospitality, retail shops or one of the reenactment or tour gigs but at the end of the day they went to the same places to hang out and were happy to be a part of the culture of the town. Many of them embraced the heritage of the town and dressed the part, while others dressed the part only because that’s how they’d been dressed by their parents. A few people carried guns on their belt, only a few were the old style cowboy guns and based on the dress of those people I guessed they were part of a reenactment. A couple others had semiautomatic pistols stuck in their shoulder or belt holsters and looked more like modern day cowboys. Then there were the folks who rented a wardrobe for a day and walked around all decked out like fancy 1800’s folks. All in all, it put off a cool vibe of authenticity.

One of the locals told me that the movie Tombstone (which is pretty much playing on every TV in town and immediately started again the minute it ends) really put them on the map as a tourist attraction. Before then there had been people visiting but now it’s much more and doesn’t seem to be slowing down too much other than the economic situation that has been hitting everyone.

Sadly, much of what used to be Tombstone is gone, and the majority of what tourists come for is Allen street so you don’t feel super immersed in the old town life. Apparently there were 18,000 people in Tombstone at it’s peak, and now it’s less than 1800. At least according to our stagecoach tour driver. Most of the really old buildings are gone, although there are still enough to make you feel like it’s authentic even with a number of 50’s and 60’s constructed buildings mixed in the surrounding neighborhood, so they must not have had any historic development requirements to keep new construction looking as much like the old style as possible. There’s lots of stuff for sale there, and property is quite cheap, especially for a tourist town. Not much new construction here for years, although there is some. I would guess the most of the new construction were country homes outside the town from what I saw. Except for of course the government buildings. Those always seem to be the nicest in small towns – the visitors center, the nearly brand new post office, and so on.

If you’re in the Tucson area, it’s a little over an hour’s drive to Tombstone and can easily be a day trip. I highly recommend it, although it’s better to stay for a few nights to really get the feel of it. There’s lots of lodgin options from B&B’s and Inns to RV park, a biker-run biker-hotel (the harley kind, not the hippie pedal-yourself kind) and even a Best Western that looked cool from the outside and a Holiday Inn Express although both of these are more than a little walk north of the town itself.